To wrap up Women's History Month, we wanted to highlight and celebrate women who are doing incredible things and making history today. From diversity and inclusion advocates to young poets to teenaged trailblazers, these women are influencing the world as we know it, impacting the lives of young learners all over the world. If you can read this post and not feel inspired then we haven't done our jobs.

Dr. Bettina L. Love co-founded the Abolitionist Teaching Network in 2020 to help teachers and parents fight against injustice in their schools. Abolitionist Teaching comes from a critical race lens and encourages educators to protest, boycott, and call out leaders who are perpetuating discrimination often found in school communities. Dr. Love is also an author, researcher, educator, and advocate with a strong focus on celebrating diversity and promoting inclusion. Her accomplishments include leading a discussion at the White House Research Conference on Girls, being named the Nasir Jones Hiphop Fellow at the Hutchins Center for African and African American Research at Harvard University, and Georgia's House of Representatives presenting her with a resolution for her deep impact on education.

Malala Yousafzai has been fighting for girls' education since she was 11. Speaking out about girls' right to learn made her the target of the Taliban, who managed to shoot her in an ambush in 2012. She survived and has been dedicating her time and energy since then. In 2020, she graduated from Oxford University and works with her organization, the Malala Fund, to ensure a free, safe, and quality education to every girl. Malala travels all over the world to meet girls who are struggling with war, poverty, gender discrimination and other hardships. She hears their stories and fights along with them to get their stories heard and enable changes to be made.

Gitanjali Rao is just 16 years old and already making a huge impact on society with her use of technology to address major issues such as water contamination, opioid addiction, and cyberbullying. She's on a mission to inspire other young innovators to solve problems worldwide. Kindly, her app and a Chrome extension that identifies cyberbullying and helps students rethink their words, is just one step in her incredible journey. Gitanjali also works with schools, STEM organizations for girls, museums, and large organizations like Shanghai International Youth Science and Technology group and the Royal Academy of Engineering in London.  Watch her TED Talk about her process of problem solving and innovation.

Amanda Gorman was 22 at President Joe Biden's inauguration in 2021 when she became the youngest poet to ever speak at an inaugural ceremony, reading "The Hill We Climb," a poem she penned especially for the occasion. Already a Harvard graduate and the national youth poet laureate, Amanda adds this accomplishment to her resume because she was hand-chosen to speak by the incoming First Lady Dr. Jill Biden. Since then, her books have been top sellers on Amazon and Barnes & Noble, she's signed with IMG Models, and has even gotten to sit down with former First Lady Michelle Obama for a Time magazine interview.

Another exciting thing happening for women in 2022, the US Mint is starting a four-year program that celebrates extraordinary women who have accomplished and contributed incredible things to our country. Each year, the Mint will release up to five new designs honoring a woman who has made an impact in government, science, art, civil rights, or other important areas of life. The first quarter will pay homage to the late poet, performer, and activist Maya Angelou. Others being celebrated this year are an astronaut, a Cherokee chief, a superintendent of a public school district, and a Chinese American film star! Read more about this program here.

To these incredible women and all the others who are making the world a better place, we sincerely thank you!

It's March already. 😬 But March means Women's History Month and we love that! 🙋‍♀️💪 In honor of this, we've curated a short list (much shorter than deserved) of extraordinary women who have impacted younger generations through education. These women have overcome obstacles to blaze the trails for those who would follow them and continue moving education toward a more equitable experience for all students. Feel free to share in your classrooms, research more influential women, and encourage your students to learn more!

Fannie Jackson Coppin was in college in the 1860s during the Civil War, in a time when schools were refusing to serve freed slaves. When she enrolled in 1860, Oberlin College in Ohio was one of the first white schools to open its doors to black students. After graduating, Fannie was a teacher at the Institute for Colored Youth in Pennsylvania where she would be promoted to principal four years later and hold that position for nearly 40 years.
In her tenure as principal, she eliminated tuition so that all students could attend regardless of family income. Fannie was determined to educate, encourage, and support her students to participate in civic society and to value racial solidarity as the racial tensions continued to grow during that time. She also added trade classes to round out the opportunities the school had to offer.
Linda Perkins, an associate professor at Claremont Graduate University, stated, "People were in awe of this woman because of her dedication not only to the field of education but to her race. She believed education would free black people."

Mary Jane McLeod Bethune was an educator, stateswoman, philanthropist, humanitarian, and civil rights activist. She was the daughter of freed slaves and grew up working on a cotton farm. After graduating from the Dwight Moody's Institute for Home and Foreign Missions in Chicago, Illinois, she became a teacher in South Carolina. She later moved to Florida and opened the Daytona Beach Literary and Industrial School for Training Negro Girls, a boarding school. With time and monetary contributions garnered by Mary, the school became a college and eventually merged with an all-male establishment to become the Bethune-Cookman College.
In addition to her work advocating for the education of black Americans, she also took part in government, serving under President Franklin D. Roosevelt as the director of Negro Affairs of the National Youth Administration as well as the leader of FDR's "black cabinet." Not stopping there, Mary's mission of racial and gender equality led her to play important roles in the NAACP, the Women's Army Corps, and the United Nations, among other organizations.

Lily Ann Granderson was born a slave, and while she was a house slave in Kentucky, the master's children taught her how to read and write. After the death of her master, she was sold to a cotton plantation in Mississippi where she worked in the fields. When her health began to decline, she was relocated to the master's home to be a house slave once more.
It was in the town of Natchez where she would teach the children slaves to read and write at midnight in a hidden room down a back alley. It was illegal to educate slaves, so Lily was surprised when, after seven years, her secret school was found but no arrests were made. There were no laws against slaves teaching slaves, so she was able to continue teaching for many years after. With the education given them by Lily, hundreds of slaves were able to write their own "travel passes" and travel to freedom. After the Civil War, she continued to teach freed slaves to read and write. 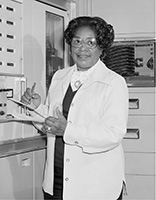 Mary Jackson was one of the African American women called "human computers" at NASA in the 1950s and 60s. Her expertise in mathematics played a major part in developing the space program. At the time, segregation and discrimination were the norm, but Mary continued to work hard despite the beliefs of those around her. On top of her challenging mathematics work, she also took engineering classes to advance her career. Soon, she was promoted to become NASA's first Black female engineer and contributed on important experiments and research studies. Throughout her tenure there, Mary became a leading voice for women and other minorities to further their careers.
Outside of NASA, she worked at the Hampton's King Street Community center in the 1970s and helped the kids in the science club build their own wind tunnel and perform experiments. She advocated for black children to get interested in science and educated them on the many career opportunities that would be available to them. Mary was also a Girl Scout troop leader, a chair for the NASA United Way campaigns, and a member of the National Technical Association.

For more information on these wonderful women and many more, visit womenshistorymonth.gov and continue celebrating the women of the world!